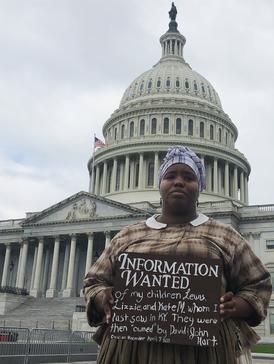 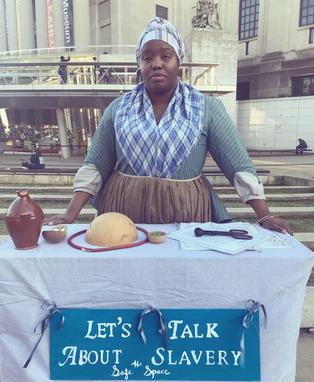 #SlaveryMadePlain is a series of performance art pieces that highlights how slavery continues to shape our nation’s politics in ways that are not fully appreciated by the American populace. Living historian and performance artist Cheyney McKnight uses her professional experience in public history with performance art in order to connect participants with the past.

Not Your Momma's History

On July 4th, 2017 McKnight collaborated with two fashion-focused creative agencies Fashioning the Self in Slavery and Freedom (Jonathan Square) and The Common Thread Project (Mikaila Brown) to ponder the question, "What to a slave is the 4th of July?”  Frederick Douglass famously asked the question in an untitled speech delivered on July 5, 1852. Though slavery as a formal institution ended well over a century ago, Douglass’s question is just as relevant today as it was in the nineteenth century. We as citizens of the United States grapple with the legacy of slavery on a daily basis as forms of coerced labor still exist and the consequences of enslavement are still palpable through continued racial inequality. This is especially true in New York City, a city whose foundation was laid on the backs of enslaved Africans and their descendants. McKnight took to the streets of lower Manhattan on July 4th dressed as an enslaved woman, holding a placard reading Douglass’s famous quote. Passersbys were invited to contemplate the enduring legacy of slavery, using Frederick Douglass’s famous inquiry as a point of departure.